1UP in the top gainers on CionMarketCap too!

Time for our first DeFi partnership announcement and integration: Ferrum!

Ferrum will be providing multiple staking portals for 1UP token holders to be able to earn very solid APY%.

The Ferrum 1UP staking portal will lock up a large portion of the 1UP supply and offer stakers incredibly strong returns on their stake.

If you have not yet checked out what else Ferrum is up to, give their website a look. These guys are solid.

This partnership with Ferrum is the first of MANY DeFi integrations and partnerships that Uptrennd will be rolling out with. Things are just getting warmed up.

Uptrennd is also in talks with a handful of top-20 exchanges. This week is going to be BIG.

(This is not an investment advice)
Biggest Gainers and Losers: https://coinmarketcap.com/gainers-losers/ 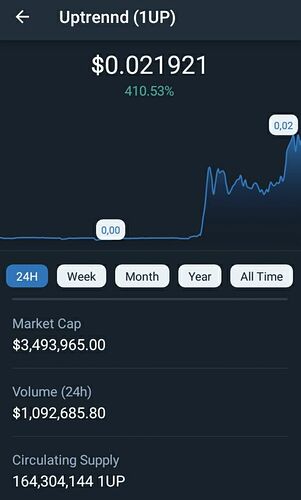 1UP is a native ERC-20 token that is built around the core upvoting system, and serves as Uptrennd’s digital currency. Uptrennd is a social media platform that differentiates itself by building in incentive structures that reward both content creators and users who engage with content.

On Uptrennd, users are rewarded with points for both submitting contents such as videos, music and news as well as for interacting with contents posted. Points can then be exchanged for 1UP tokens among many other various rewards available. The value of points comes from funnelling advertisement revenue directly into the Uptrennd ecosystem.

How do I earn points and 1UP tokens?

Content creation and interaction are some of the main ways to earn points (and 1UP tokens), but not the only way. Here’s a full list of what you can do to earn points, according to Uptrennd:

2.The Sharing Economy - Reposts earn you 50% of the points

3.Receiving donations from other usersDaily

6.Inviting new users onto the platform

How can I use 1UP token?

Level up accounts - Uptrennd also included a feature which allows users to “level up” their account, whereby users are able to earn increased rewards/points as they level up their accounts using 1UP tokens.

Trading - Points can be exchanged for 1UP tokens, which can then be traded on a third party exchange.

Uptrennd was founded in 2019 by Jeff Kirdeikis. Prior to that, Kirdeikis was involved with the Cryptocurrency Investing Network (CCI) and noticed that there was an increasing amount of censorship (on Facebook, Twitter & Google) surrounding crypto-based ads. With that in mind, Kirdeikis and the CCI team set out with a goal to solve censorship and created Uptrennd.

It is a great pump that is still running from the uniswap.org 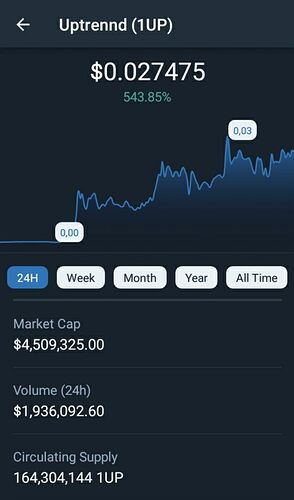 yes I saw it moving up

it is moving wonderfully