The smallest part of a bitcoin is called a “satoshi”. 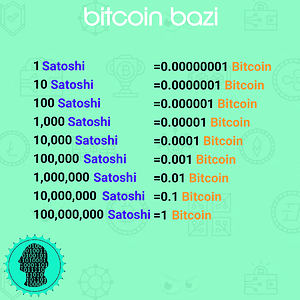 Each Satoshi is equal to 0.00000001 bitcoins and is named after the creator of the first cryptocurrency “Satoshi Nakamoto”. Nakamoto wrote an article in 2008 for introducing Bitcoin to computer enthusiasts.
To this day, more than a decade after he invented Bitcoin, Satoshi’s identity is still hidden, and no one still knows whether Satoshi is a pseudonym for a person or a group!

Satoshi Nakamoto probably guessed from the beginning that his invention was going to be very valuable over time, so he divided bitcoin into “one hundred million” of smaller units, and you can buy units much smaller than one bitcoin on his network, Sell ​​and move. In fact, one bitcoin is equivalent to one hundred million Satoshi.

So you can buy Bitcoin for a small amount, even a few Satoshi!

This is insightful. The newbies would find it very informative.

Very very informative, I’ve been hearing satoshi this satoshi that, nice to come across this explanation.

The explanation is valid for beginners in cryptocurrency.