I installed the Trust Wallet App on my phone last week.
I’m waiting for a deposit on the NANO wallet since today, it has not arrived yet.
The several NANO blockain explorers (Nano Looker, Nano Crawler) I checked, as well as the Nault Desktop App, are all saying that my account is not activated, that it has to “send a block to accept the pending transactions”. I can see the pending transactions on these sites, but not on the Trust Wallet App.

I’ve seen on the following topic that someone was having a similar issue… but it kind of resolved by itself ?? : 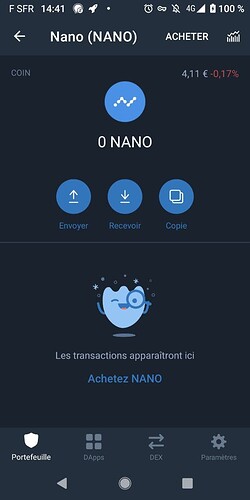 UPDATE : Transactions received a couple days after opening this thread.
The delay was probably due to a spam attack occurring on some Nano nodes.

Everything back to normal, now.

A piece of advice for anyone having a similar issue in the future : go to the Nano Discord, you’ll get help there : https://chat.nano.org/

Thank you for the suggestions.

Nano network has issues with DDOS attack on the network in the recent days, I believe node update fixes this issue and this problem should disappear.