Why is my ETH transaction fee so high?

Ethereum (ETH) transaction fees increase when the network is busier. This is caused by more people making transactions like sending tokens, trading on DEXes or depositing their assets to lending platforms.

According to this post, “The average fee per transaction on Ethereum reached $6.04 Wednesday night (August 12), according to Blockchair, the highest fees since 2015”. 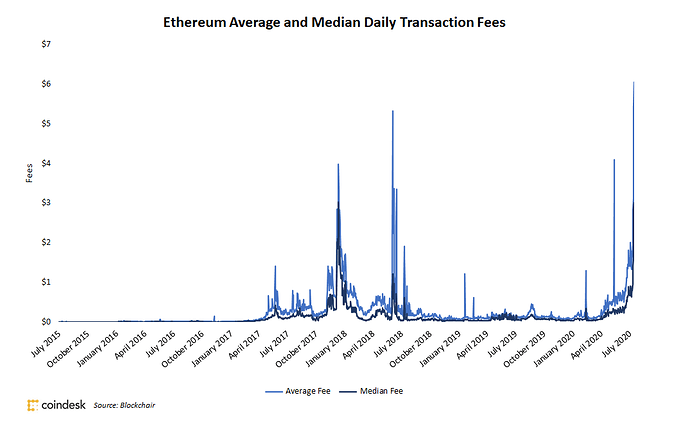 Looking at ETH Gas Station, as of August 14,2020, we can clearly see that the fees have greatly increase. You can also see what contracts are currently using up the most fees on the Ethereum network.

In order to compensate for this, Trust Wallet will always use the recommend gas price to ensure transactions get processed as soon as possible. Lowering this setting may cause further delays or even cause your transactions to fail.

Even when simply sending ETH to another wallet, the app will follow the recommended gas prices. As shown on the following screenshots, sending $8 worth of ETH would cost around $1.50. The app will always use the highest gas price so that your transaction is prioritized.

Ethereum uses the “first price auction” system to price gas. The system works by having every sender submit a bid, known as a gas limit, for how much they’re willing to pay. Miners then pick up desirable transactions and include them in the next block. In theory, this allows senders to prioritize their transactions by paying a higher fee while saving ETH through refunds.
Source: Understanding Ethereum's Gas and Transaction Fees - Crypto Briefing

Making a more complex transaction like a token swap on a DEX or submitting a transaction to a smart contract also warrants a higher fee. The Network Fee that you will see on the app is just an estimate. This is the maximum fee that will be consumed for the transaction given the current gas prices. Not all of it gets used up and some of it gets refunded.

Here is a sample of token swap from one ERC20 token to another ERC20 token. The estimated fee was around $10 at the current Gas price of 55 Gwei. But eventually, the fee used was only 43.22% which is just under $5.

Note: If your transaction gets stuck due to a low fee setting, you can follow this guide to try and cancel it or increase the fees, Pending "Stuck" Transactions.

< Back to Troubleshooter Menu

15 Likes
How to Change the ETH Gas Fee
$3 Gas price. How?
Cost of Swapping too High
Risks of DEX Trading
Question about BNB transaction fees
All my transaction are failed
Insuficient fee
Help please. USDT went to ERC20 on trust wallet and can’t do anything now
I sended BUSD to Trust Wallet but it's ERC20
My wallet won’t show Elrond ERC20 value
How to Cancel a Pending ETH or ERC20 Token Transaction
Help required Transfer XYO out of Trust Wallet to My Coinbase Wallet
Extreme high fees send KICK Token
Still trying to Converting USDT
Insuficient fee
Unable to transfer USDT off my wallet - Help needed
WalletConnect to compound
Need help in sending Elrond
A brief introduction to consensus mechanisms
What is EIP-1559?
Unable to Swap Kishu Inu
Unable to Swap Kishu Inu
Insuficient fee
I sent USDT (from binance) to my BSC (trust address) wallet
I sent USDT (from binance) to my BSC (trust address) wallet
How to Trade with the Built-In DEX (Swap Option)
Leverj (L2)tokens were sent to my TWT, but I would like to withdraw them to my ethereum wallet on Binance
Sent my 2 AAVE tokens to my Trust Wallet over 20 hours ago and it is not showing up